July has begun and the rain continues to fall, but summer feels like it’s just around the corner.

Since this month marks the end of the 2019 fiscal year, the Mackerel team has been busy revising its long-term plans and putting everything in order for next term like road maps and official events. If I get any news that I’m able to report, I’ll be sure to let you all know through our blog and other social networks.

Settings have been added to automatically switch themes to match the appearance (Dark Mode/Light Mode) of macOS Mojave. You can enable/disable automatic theme switching from the user interface of your account settings. 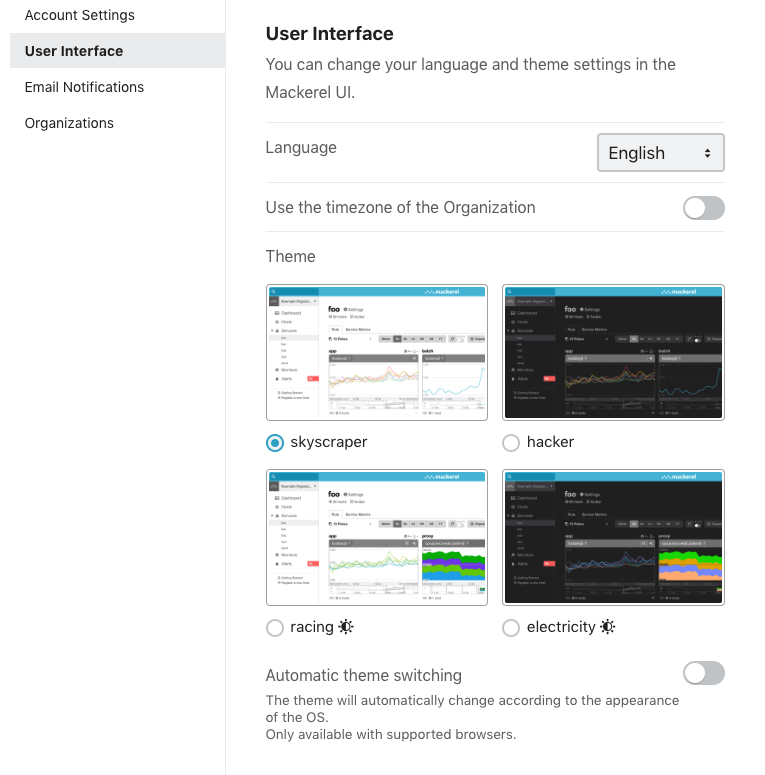 Note that this function is only available for browsers/OS that are appearance mode compatible.

For those of you who are new to Mackerel, you may not have even noticed that themes can be switched in the first place. Mackerel's Dark Mode theme was originally released as an April fools joke in 2015 under the promotional tag “The hacker mode you see in movies”, but was later officially released thanks to such a favorable reception. With this release, it is now possible to have the theme automatically switch to this hacker mode to match the macOS appearance settings.

Changes have been made to the exception that generates with HTTP errors in mackerel-client-ruby v0.8.0. In addition to this, the issue of the exception not being sent correctly when receiving some status codes has been fixed.