This week one of the three biggest festivals in Japan, Gion Matsuri, is in full swing here in Kyoto where one part of the Mackerel development team is hard at work. The sounds of bells, drums, and chanting fill the street just outside our office window as the parade goes by. With this as our lovely backdrop, we’re delighted to bring you this week’s Mackerel update:

Clicking the Fullscreen button in the upper right-hand corner of a graph will open that graph in its own separate tab. 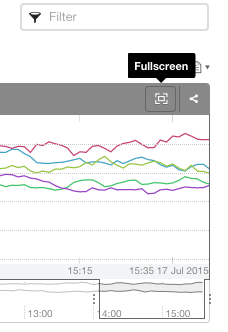 With this it’s now possible to obtain permalinks for graphs, adding another option to the various ways to share graph information among team members.

Please note that this feature can only be used for role graphs which are displayed in a service’s details page.

With Mackerel, connectivity of hosts which are running mackerel-agent is monitored by default. Before, this was true of all hosts without exception, but now, just as with other values that can be monitored, it’s possible to configure the scope of connectivity monitoring to apply to or exclude only those services and roles specified by the user.

This feature will come in handy when, for example, you want to turn off connectivity monitoring for a laptop PC that frequently goes into sleep mode. Install mackerel-agent on your PC and start monitoring values like battery percentage and more.

Now, directly in the hosts list, several principal metrics can be viewed, making it faster and easier to get a general idea of the working status of your hosts.

mackerel-agent version 0.18.1 has been released.

With this update, the following changes and adjustments have been made.