id:missasan) here with another update announcement.

Legacy Custom Dashboards will be completely discontinued at the end of March.

The following announcement was made on January 12th.

（Here’s an excerpt from the above announcement）

An update to make the current custom dashboards compatible with mkr is currently under consideration (mkr dashboards is currently only supported for Legacy Custom Dashboards).

With this update, you can now operate current Custom Dashboards with mkr dashboard commands (mkr v0.44.1).

The following 4 commands are supported.

This function was developed by one of our Mackerel Ambassadors. @fujiwara

He noticed that mkr commands weren’t supported when the announcement was made, and half a month later, he sent us a PR!

All of us on the Mackerel team were super impressed by how quickly this was implemented. We, and I’m sure all Mackerel users, are very grateful. This just goes to show that Mackerel truly is a service supported by its users.

Thank you so much! @fujiwara

If you haven't migrated your Legacy Custom Dashboard yet, you’ll want to take advantage of this.

Prior to this release, if the CRITICAL threshold for check-load was exceeded, commands would end in an error without issuing alerts. This issue has been fixed in go-check-plugins v0.39.2.

With the release of mkr v0.44.1, the issue of settings being deleted unintentionally when executing commands mkr monitors push and mkr monitors diff has been fixed.

Thank you to everyone who contributed!

Amazon Route 53 can now be monitored with AWS Integration

This service lets you visualize / monitor the metrics listed in the help page below.

Check out this help page for more on how to set up AWS Integration.

Azure Blob Storage can now be monitored with Azure Integration

This service lets you visualize / monitor the metrics listed in the help page below.

Check out this help page for more on how to set up Azure Integration.

Legacy Custom Dashboards can no longer be created

As announced in a previous blog post, the Legacy Custom Dashboard function will gradually be discontinued by the end of March 2020.

The image displayed here is an example of the Legacy Custom Dashboard function that will be discontinued. Please be sure to check the above article and migrate or delete as necessary (Legacy Custom Dashboards that have not been deleted will automatically become not viewable after the end of March).

Azure Files can now be monitored with Azure Integration

It is now possible to monitor Azure Files with Azure integration. Azure Files is a fully managed service for file sharing that can be accessed via SMB and NFS protocols.

With this you can visualize and monitor the metrics listed in the help page linked below.

See the following help page for more on how to set up Azure Integration.

Newly obtainable metric targets have been added for Azure / Application Gateway Integration. The new metrics are Listener related and listed below.

The "#" in the metric name is a placeholder for the Listener information of the target application gateway. Check out the help page linked below for more details.

On top of these additions, the number of metrics changes from 25 to 33 for both Standard V2 and WAF V2, and will be converted into 2 micro hosts.

The following updates have been made to Mackerel related OSS. A big thank you to everyone who contributed!

Thank you for choosing Mackerel. Today’s announcement concerns the discontinuation of the Legacy Custom Dashboard function. Please note that because migration will not be automatic, we recommend taking necessary measures in advance. See below for more details.

The schedule for the discontinuation of these functions is as follows.

Other points of note

Again, we apologize for any inconvenience that this may cause those of you who are currently using this function. On the bright side, compared to the Legacy Custom Dashboards, the current Custom Dashboards supports a handful of useful widgets like the Markdown widget mentioned above and lets you intuitively rearrange the size, layout, and display range of each widget, making this function handy all-around.

We hope you will take this opportunity to utilize the current Custom Dashboards and all of its functions. Thank you for your understanding and cooperation.

id:a-know) here again wishing you a happy new year! Here’s to hoping 2021 is a great one!

Without further ado, let’s get to today’s announcement.

Have you seen the recent announcement from AWS?

To go along with this announcement, we are re-examining the Mackerel Help page regarding AWS Integration.

id:a-know) here with the last update announcement of 2020. Thank you for choosing Mackerel this year.

The following metrics have been added / replaced for Kinesis Data Streams.

Also, the maximum number of metrics per host has been increased from 31 to 34.

The same applies to the above-mentioned Kinesis Data Streams integration. If necessary, you can select integration targets using the optional selection function.

Network interface metrics can now be excluded with mackerel-agent

You can now exclude network interface metrics by writing the following in the mackerel-agent.conf.

Using a regular expression, metrics from the specified interface will not be collected. For Windows Server, specify the interface name that corresponds to that in Device Manager.

See the help page below for more information.

Official support for mackerel-agent in CentOS6 environments has ended

With CentOS6 ending their support on November 30th of this year, Mackerel too has officially ended support for CentOS6 environments.

Even if an environment is kept the same, surrounding environments are always changing (for example, managing old versions of TLS communication and host CA certificate renewal etc.), and so we believe that the best course of action is to update and switch environments. We apologize for the inconvenience and thank you for your cooperation.

Up until now, event notifications for things like registering a host in Mackerel and changes to monitors were only supported for some notification channels such as Slack and Webhook.

Now, these notifications are also available for email as well. 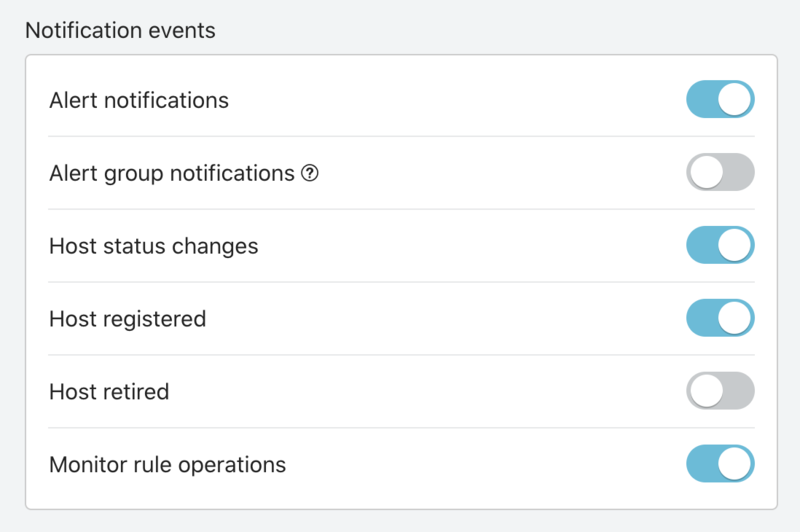 We hope that email notifications will help you stay on top of the unexpected.

Two types of metrics have been added, Bucket Size and Number Of Objects. See the help page linked below.

Please note that both are daily metrics.

Thank you to everyone who contributed!

Support availability during the year-end and New Year holidays

The end of the year is fast approaching with less than three weeks left in 2020. And thank you for choosing Mackerel this year.

For those of you planning to look over your Mackerel settings etc. before the end of the year and New Year holidays, we recommend you do so as soon as possible. And if you have any questions or concerns, please do not hesitate to contact us.